I always hated to program heating system thermostats. Ridiculous key combination, repetitive tasks and at the end a build-in predictive algorithm that thinks it knows better and always guesses wrong. Adding insult to injury some of the learning thermostat purposely show the wrong temperature – which is considered a feature.

With winter coming another dreadful task to change programming of all thermostats was necessary. Rather than going through another set of strange key combination I bought the Nest betting on its iPhone apps as remote control.

The Nest is build by a home automation company co-founded in 2010 by former Apple engineers Tony Fadell and Matt Rogers. The device oozes Apple-like focus on design and its packaging shows similar attention. I have to exclude the funky shaped screwdriver, which seems to be more “for show” than anything else.

Installation was reasonably quick with the only hiccup was due to our system having two fan speeds and the Nest only supporting one. We like to run the fan constantly at low speed to circulate air – too bad. I had to go online and search as well as get the old thermostat’s manual to resolve the fan connectivity issue.

Once the nest was installed, powered-up and connected to WIFI it started with the now common consumer experience of “Updating”. I watched the “blue bar” with a sinking feeling of doom – luckily the device finished with still been responsive and I could connect to it from the iPhone app – programming was a breeze with a convenient temperature control.

Nest does what it is supposed to do – it is a good learning thermostat. The motion sensor is a cool feature allowing the device to automatically toggle “away” or “home” mode based on the absence or presence of motion.

The apps on iPhone, IPad and computer all work fine and the Energy History is useful. I can see the room temperature on my computer in the notification area and I have access to the Nest app from everywhere – cool. 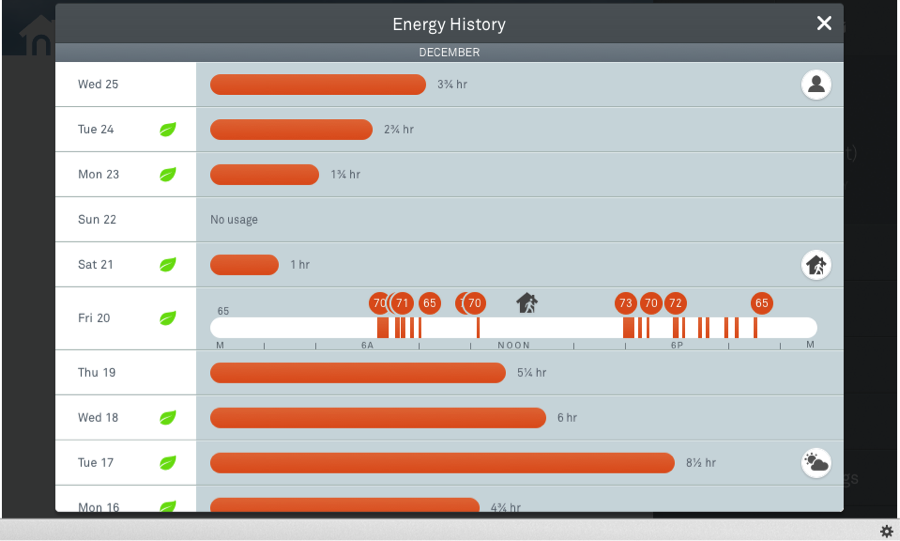 The Nest cloud service however is underwhelming especially considering the price of the device.

The Nest is a beautiful hardware device that can be remote controlled by apps with innovative features. As an example what the Internet of Things could look like or a showcase of what cool services devices connected to the cloud could offer it is a disappointment.