It is interesting to think of e-mail as a giant social network, which would put Facebook squarely into the number two spot in the market. The immediate questions that arise are: what is different and why has e-mail not adopted more social features.

Both services have identity, profiles and allow users to connect and share information. However social networks are more focused on sharing while e-mail is still the preferred channel for private communication.

The role of a private communication channel might be a reason that e-mail providers haven’t adopted social features more aggressively. This in turn could be the reason that the market of online e-mail services, such as gmail, yahoo mail, Hotmail, has not produced a player like Facebook, which exploits network effects to dominate.

Does social media analysis apply to email too and how similar do the networks behave? One way to find out is to run a test. The playground for e-mail and text analysis is the Enron email dataset.

Enron Corporation was an American energy, commodities, and services company based in Houston, Texas. Before its bankruptcy on December 2, 2001, Enron employed approximately 20,000 staff and was one of the world’s major electricity, natural gas, communications, and pulp and paper company, with claimed revenues of nearly $101 billion during 2000.

The Enron scandal, revealed in October 2001, ultimately leads to Enron’s bankruptcy. Kenneth Lay, Jeffery Skilling and others went on trial for their part in the Enron scandal. Lay was convicted of all six counts of securities and wire fraud for which he had been tried. Skilling was convicted of 19 of 28 counts of securities fraud and wire fraud and acquitted on the remaining nine, including charges of insider trading.

To be able to run social media analysis tools on the Enron data set, it needs to be convert into a social network like structure of profiles, connections and messages. Connections are formed between actors if they had an email exchange and all messages authored by an actor are combined into the profile.

The first step is to analyze the network by scoring the influence of actors, i.e. how information has spread through the company. The following screenshot shows actors with Enron email ranked by influence: 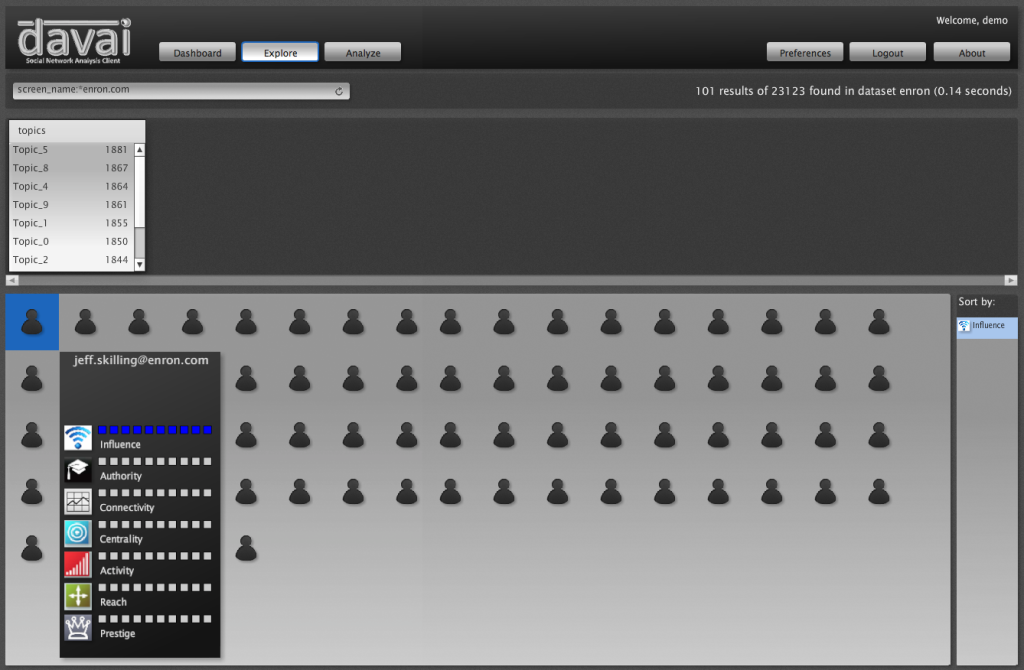 The list of the 10 top highest scored actors includes Lay and Skilling:

The second step is to cluster actors according to topics of interest based on e-mails they have authored. Topics are extracted by the system automatically and topic-related clusters group people that used words, phrases and concepts in a similar way.

The following tables show the top three topics Lay and Skilling dealt with in their email and the top terms that constitute the two main topics:

The next analysis step is to use topics to pull-up clusters of similar actors and to filter and analyze communication flow: 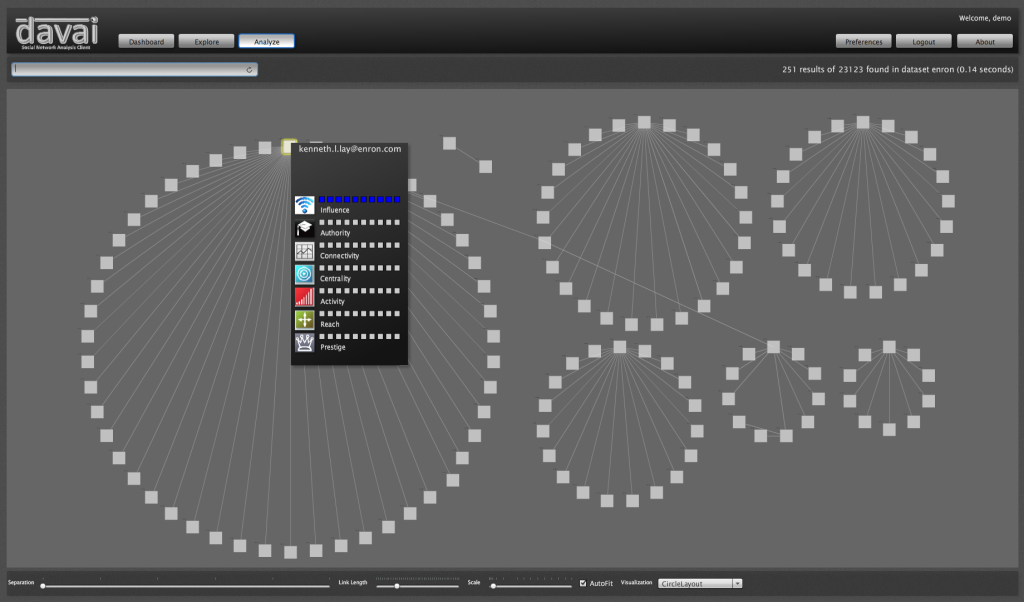 The analysis tools used above have been designed to identify networked customers that will respond to marketing activities by brands on social networks. E-mail is still one of the most important channels for brands to connect with customers (permission based) and above analysis has shown how similar social and e-mail networks are regarding dissemination of information.

Will we see them merging moving forward?